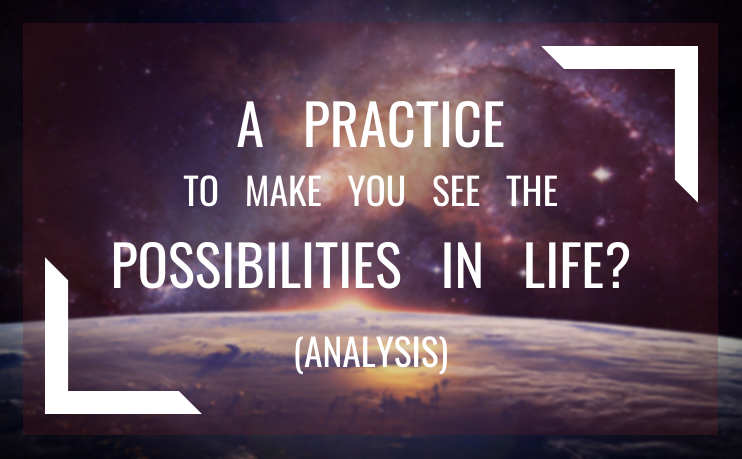 Yesterday marked the end of the four-week “It’s totally possible that …” daily practice. In this blog post, I will go through what I learned and noticed doing the exercise for four weeks straight, except the built-in cheat days I used.

A new years resolution (or two)

Before continuing, I’d like to add a short paragraph or two on why I decided to try this practice. This year I decided to make two new years resolutions. My inspiration for these two came from Steve Pavlina (yet again) and his blog post 365-day challenges. After reading that post I felt very inspired to take action, especially since I saw a few of my friends and some strangers take action and create their own 365-day challenges. I, however, wanted to make two relatively simple ones and include some cheat opportunities since that approach has a higher chance of success for me rather than having to be perfect for 365 days.

The first of these was to go outside for a walk for 30 minutes each day without listening to anything. When I’ve done this previously, I noticed several benefits to my health, both physical and mental, but also that I usually solve a lot of problems or come up with good ideas during these walks. So I decided that it would be beneficial to do this every day. The second one was to do a personal development exercise every day. But instead of doing a single one for the entire year, I came up with the idea to do one for four weeks, then switch to another exercise. Switching every four weeks means I will get to try out thirteen different daily practices throughout the year.

The practice itself is rather simple. That doesn’t mean it’s easy though. I got the exercise from Kyle Cease, he has mentioned it several times in his coaching calls that I attend. Or to be precise I often watch a reply of these since they are between 3 and 4 am here in central Europe. To do the exercise you “simply” continue the sentence: “It’s totally possible that …” Here are a few examples:

I don’t think there is a general rule what you should write and what you shouldn’t write, except maybe skip the bad stuff. But I decided to write mostly about good things that weren’t entirely probable, but at the same time not impossible or situations that I didn’t believe could come true. Like I wouldn’t write it’s totally possible that I’ll go to the moon next week. But I could write it’s totally possible that I’ll visit the moon one day.

My expectations of the practice

Coming up with 100 possibilities are HARD

The first days I did were days off since I started on the 29th of January, so I “only” had to write 50 possibilities. Coming up with 50 possibilities took about 30 minutes and wasn’t that hard, especially since I had done the exercise orally before and had also been thinking of a few possibilities before I began to write.

The more specific you get, the easier it gets. I already knew this, but I think the crux when writing 100 is to switch it up about every 10 or so possibilities.

One effect of doing the exercise I noticed was the change of my grit. I’ve felt that I have lost a lot of the grit that I used to have, but that doesn’t seem the case as long as I have a strong why I am doing anything. Because even though this was hard I didn’t even come close to quit. To see that gave me a huge boost in self-confidence that I can complete tasks I set out to do. That doesn’t really have with the exercise per se, I think the result would’ve been the same with any other exercise that requires grit to complete.

Some of these possibilities were also fantasies I’ve had, I didn’t know if I wanted them to become true but it felt good to fantasies about them.

When I only wrote 50 possibilities on the other hand, I often felt enthusiastic and happy. So it did jump start my enthusiasm, especially if I wrote possibilities for a project that I was working on.

To be blunt, I don’t think I’ll do this exercise again anytime soon. I don’t feel the results are worth the effort, or at least I think other daily practices achieve the same and more results from less time investment and effort. Although I don’t regret doing the exercise for all these weeks. It was a challenge, and I’d at least say that you should try it out and see what if this exercise might be for you; we’re all different after all.

For the fantasies, I don’t really know if that’s good or bad. It felt good to be able to bask in them some of the days. But I can’t really say if they hade a positive or negative effect on me or those around me.

What I liked most about this exercise was the enthusiasm after writing some of these. I did, however, often find it even more rewarding to walk outside for 30 minutes, and my enthusiasm would often be even greater during and after this walk than writing possibilities. That’s why I’d rather walk 30 minutes and think about anything (including possibilities) than write 50 possibilities.

It could also be that merely saying out 50 possibilities out loud is far more efficient than writing them down. I should also mention that I did write them down with a pen in my notebook most of the time, except for two days when I did them on my computer instead (which went a lot faster). The reason I decided to write on the computer was that I wanted to try streaming the practice live to other people on Twitch.

For the project as a whole, I felt a sense of pride and closure when I wrote the last, “it’s totally possible that.” The project had ended, and I had seen it all the way to the end. It was a long time since I made a specific goal that I followed through on. So this was a big personal success for me 🙂

My next four-week daily practice: Meditation

The following daily practice I’ll try is to meditate an hour for every workday and at least half an hour for every day off, although I’ll strive to meditate an hour on most days off as well. The type of meditation I’ll follow is to simply sit down and let whatever thoughts and feelings be there, to be a space for them and not try to clear my mind or anything like that. I’ve done this type of meditation before and I usually just managed to do a 10-minute meditation before I tried this approach.

Feel free to join in on this challenge, or create your own four-week or 30-day challenge 🙂 Please let me know down in the comments if you do 🙂

If you need help with a situation or someone to talk through your problems, feel free to contact me and we can probably work something out ?