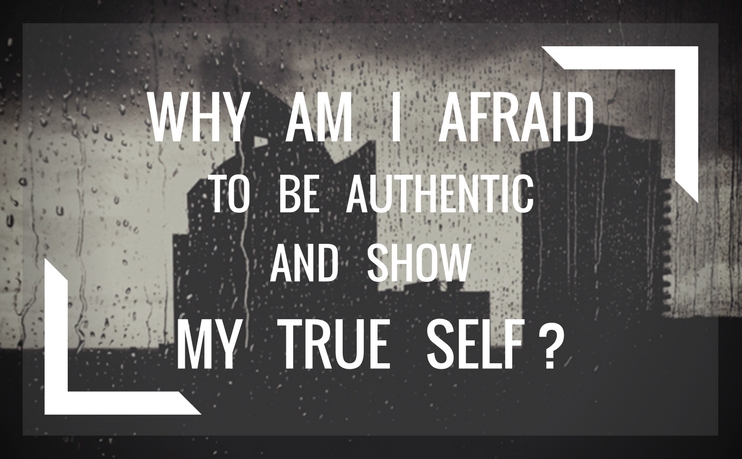 To get into the right mood, play the follow piece while reading below 🙂

Yesterday (as I’m writing this), I was at a Toastmasters meeting. First off, it was one of the best meetings I’ve been to ever. There was this one person, let’s call him Robert, who shared his troubles doing what he knew was the right thing to do (or eat and exercise in this case).

I’m in the same position; it feels like I’m playing the small game, I’m afraid to step up my game and live the life that I truly want to live. I’m scared of starting to coach, I’m scared of being successful and everything it’ll entail.

What do you truly shine at and want to express?

What does all this have to do with to be authentic and show my true self? In his speech, Robert asked us all one question (I’m paraphrasing here):

What’s that one thing you truly shine at [and want to express] but since you don’t want to stand out too much you’ve tried to hide it or rub it out?

As an exercise, we were asked to share this one thing with our neighbor. At first, I couldn’t come up with anything really. The best thing I could come up with was that I’m exceptionally good at problem-solving and finding new weird solutions, most of which might be a bit unconventional and maybe even frowned upon by some.

But I could feel in my gut that my answer wasn’t my right answer to the question. It didn’t feel like an insight; I didn’t get a Eureka!-moment, I didn’t get all teary-eyed. That’s something I expect from finding the right answer to a question like that because that’s usually what happens for me when I get it right.

Fast-forward the time a couple of hours. I’m walking home from a fantastic Toastmaster session (and staying a bit extra to play on a grand piano that’s open for everyone to play on). As I’m walking down the street I’m listening to music from Yann Tiersen and thinking back on the meeting; it hit me.

Afraid of being imperfect

During our Table Topics session (impromptu speeches), I had been terrified of going onto the stage and give an impromptu speech. Partly because everyone had been amazing and I seriously doubted myself.

No chance I could be anywhere close to as good as everyone before me, and if I were to participate, I would be the last one out.

I was dead scared of making a fool out of myself. I want to appear perfect, and I told myself that I didn’t want to “ruin” the show. Here I go around preaching about it’s okay to be imperfect and that you have to practice (and fail) at something to get good at it. At least for smaller skills like playing the piano, giving speeches, impromptu speeches, learning to speak another language. It’s through practice, namely deliberate practice, that you get better at any skill. But there I was, not wanting to make any mistake whatsoever but appear perfect, even in this practice-friendly environment. Why is that?

The answer I found:

I don’t allow myself to be playful and have fun in front of other people. I need to be this serious, goal-oriented, high-achieving, and focused person.

Afraid of being playful in front of other people

How did I find that answer? As I was walking down an almost empty street and listening to music, a piece that touched my heart a bit extra at that moment came on.

It made me want to run as fast as I could, then jump and in bliss scream out “Woohoo!” because I was so happy at that moment. But I didn’t. Even if I wanted to do that, and even when I couldn’t see anyone except further down the road, I couldn’t do it.

I told myself; it’s not something you should do, it’s out of place. I even thought what I would do if I were to witness someone do just that. I’d probably become happy and glad for them, and it would brighten my day. Still, I couldn’t do it.

This inability to do what I want to do, even with a high probability of benefits and low likelihood of harmful effects for everyone, got me thinking of why I’m so afraid. That’s when I thought back to my Toastmasters experience and my fear to participate in the Table Topics session.

Why am I afraid of being playful?

To be honest, I’m not entirely sure. I think I picked it up in early childhood; I didn’t want to be a child anymore, I was a grown up.

Back when I turned nine, I remember opening up presents at my birthday party; I got a Disney movie (I don’t remember which one) from one of my friends. The gift was childish, and I thought it was, by far, the worst gift I had gotten in my entire childhood. To me, Disney movies were silly, and I didn’t want to have anything to do with them. Funny enough, it’s the only gift I can remember that I got from a friend from that time.

On other occasions, I’ve refused to fully participate in an activity, enjoy it, be myself and not focus on being perfect. Be it play, sports, singing, or almost any activity. This refusal has continued all the way up to my current age (29). The only exception is when I play the piano now; then I almost always lose myself in the music. And in some special friends company, I can allow myself to be playful.

So why am I afraid of being childish? I’m not sure. Maybe I was myself, and someone called me childish. Maybe it’s a story I’ve told myself over and over again that being playful (childish) isn’t appreciated and you can’t be respected while being playful. But of course, you can.

To remove this belief, one could remove it with the Lefkoe Method; another idea would be to take…

One small step at a time

As I thought about why I was so afraid to jump and scream out “Woohoo!”, another piece came on.

This time, instead of wanting to run and scream I wanted to dance my way forward on the sidewalk, sort of like they do in the movies. But I still couldn’t loosen up and dance, at least not until 40 seconds in when the piece picked up the pace and empowered me to take a small dance step forward.

I thought to myself, why not start small and take one simple step forward? I started swinging my hands a bit and danced for a few seconds down the street. It felt wonderful to do that, even if it only lasted for a few seconds. It reminded me of the musical Billy Elliot.

My lesson and take away from this experience, this insight, is to be more courageous and to challenge myself, one small step at a time.

That’s, however, easier said than done. And having a goal containing the word “more” is usually a bad idea. It’s too vague, and I will most likely fail at becoming braver. One way to reach my goal would be to create a project out of the goal. But that’s something I’ll do the next year. I already have too many things to focus on during this year.

How does the inability to be playful have anything to do with not being able to do Table Topics? The failure to be playful hindered me from seeing the chance to give an impromptu speech as a playful experience. It had to be perfect and non-childish, even when one aspect (in my opinion) of giving an impromptu speech is to play with it, to have fun.

What do you truly shine at?

I’d like to hear what you truly shine at in the comments below 🙂 Are you playful, or have you been “brought” up (by yourself) that being joyful is something to be avoided at all costs?

2 thoughts on “Why Am I Afraid To Be Authentic And Show My True Self?”