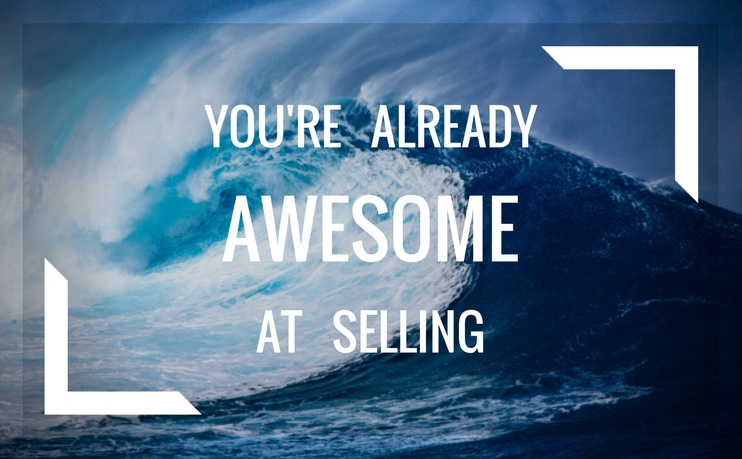 Have you ever sold and promoted the hell out of a movie, a book, or product? You don’t seem to be able to stop telling everyone how great it is.

About a week ago I had an epiphany. I was ticking off one of the week’s action items: To journal what I’m great at doing. One of the things I wrote down was that I’m great at selling products I love.

I’ve convinced a few people to buy apps that I use because I love and believe in them so much. I can easily convince people why they should listen or read a book; at least if I think the books are great. But why would I want to convince people to read books that aren’t great?

An example: The Martian

Disclaimer: This is going to sound like I’m selling the book, and I am; because it’s awesome. If you don’t want an awesome book, you can scroll down to the next section 😉

The latest example of where I sold a book was the book The Martian. It’s an awesome book. But what I love about it the most is the voice actor (I got it as an audiobook). He’s just perfect for the role. I just get lost in the book and can’t stop listening. And we all love that sensation of losing track of time, don’t we? Except maybe when you have other things you really should be doing 😉

So what’s the story of the book? The story’s main character is Mark Watney; an astronaut that gets stranded on Mars after his team had to abort the mission. Why abort the mission. Well, there was a storm coming with winds faster than the highway lunatics. Really fast in other words.

When the abort command came from NASA, they had to walk from one building to the space shuttle. Halfway to the space shuttle, Mark got swept away by an antenna that pierced him on the side. As if that wasn’t enough the antenna accidentally hit the life-sign computers; meaning the rest of the crew thought he was dead and had to leave him. But by some miracle, he survived.

I’ll just leave a short excerpt of the first chapter so you can decide for yourself if it’s awesome or not. And read everything in a highly sarcastic voice 😉

Six days into what should be the greatest two months of my life, and it’s turned into a nightmare.

I don’t even know who’ll read this. I guess someone will find it eventually. Maybe a hundred years from now.

Certainly the rest of the crew thought I did, and I can’t blame them. Maybe there’ll be a day of national mourning for me, and my Wikipedia page will say, “Mark Watney is the only human being to have died on Mars.”

And it’ll be right, probably. ‘Cause I’ll surely die here. Just not on Sol 6 when everyone thinks I did.

The Ares Program. Mankind reaching out to Mars to send people to another planet for the very first time and expand the horizons of humanity blah, blah, blah.

The Ares 1 crew did their thing and came back heroes. They got the parades and fame and love of the world.

Ares 2 did the same thing, in a different location on Mars. They got a firm handshake and a hot cup of coffee when they got home.

Ares 3. Well, that was my mission. Okay, not mine per se. Commander Lewis was in charge. I was just one of her crew. Actually, I was the very lowest ranked member of the crew. I would only be “in command” of the mission if I were the only remaining person.

What do you know? I’m in command.

So that’s the situation. I’m stranded on Mars. I have no way to communicate with Hermesor Earth. Everyone thinks I’m dead. I’m in a Hab designed to last thirty-one days.

If the oxygenator breaks down, I’ll suffocate. If the water reclaimer breaks down, I’ll die of thirst. If the Hab breaches, I’ll just kind of explode. If none of those things happen, I’ll eventually run out of food and starve to death.

I would say that’s a pretty epic way to begin a story. If you want to, you get the audiobook version of The Martian AND another book for free when you try Amazon Audible. If you have adblocker on (which I have on most sites, since I don’t like obtrusive ads), you can start your free trial here: Audible Free Trial [Digital Membership]

. You can always cancel your subscription within 30 days.

This is an affiliate link, meaning if you sign up I will get paid. Woohoo! 😀 But I would recommend the book and Audible anyway because the book is great and I love Audible service.

PRO-tip: Create a cancel reminder in your calendar a few days before the subscription ends. That way you can decide if you want to continue or cancel the subscription. I’ve forgotten to do this multiple times, and I had to pay for a service I didn’t want.

Why am I good at selling all but my products?

That turned out to be a long example. But when I’m in selling mode I want to point out why I love something.

So how come I’m great at selling other people’s products, but not my own?

I think the single most important reason is that I haven’t bought the idea myself. I’ve identified four reasons why this might be the case.

1. The product could be better

I’ll use an app as an example because there is always something that can be improved; an app is never finished. At least not until you decide that it’s finished. And if I don’t feel like I’ve done my best and I love the product myself, then I won’t be able to sell it.

2. I’m not confident in my skills

For my personal development business, I have a goal to start coaching people one-on-one. I know I’m good at coaching individuals and friends because they have told me that I’m good coaching; although they didn’t use the word coaching.

At the same time, I haven’t had any formal education, and I know there are a lot of people that are much better than me. That makes it a lot harder for me to start the coaching calls, but also how much I should charge for them.

Because I’ve often developed a product under a longer period, I almost always get tired of it. That makes me slowly lose all that passion I had for the product in the beginning.

I haven’t found a consistent way to reignite that enthusiasm yet. Or truth be told, I haven’t looked for any way yet. Although, I’m sure there exist at least one way.

As I shared the epiphany of already being awesome at selling with a Facebook group, another member shared one of my favorite TED-talks. Simon Sinek: How Great Leaders Aspire Action.

After watching this TED-talk again, I noticed I didn’t know why I have this personal development business. I want to help people take charge of their lives by taking action. But I don’t have a why. I know what I do, and how I do it. But not why. And as Simon says

People don’t buy what you do; they buy why you do it.

I honestly don’t know at the moment. I have to dig deeper into this subject and write another article about it.

The one thing I do know is that I resonated most with I believe that everyone is destined to be and do great. And by great, I don’t mean successful by societies standards. Whether you create a multi-billion dollar company, start an NGO, help your neighbor water their plants, or go and live like a nomad for the rest of your life doesn’t matter. As long as you pursue your dream and are fulfilled, then I think you’re great.

Not only in business

Now, this is going to be a weird transition. After going so deep, I want to bring it up again to some practical uses. And that’s selling isn’t only for business. You probably already sell your ideas and opinions many times per day to influence friends and family.

I use my selling skills all the time to influence which series or movies I want to watch together with others. But I also back off sometimes, because I know I can be very persuasive. xD I’m sure most of the time it’s a win-win situation. Because I only tend to recommend things I think the other person will like. Except on a few occasions, when I just want to share my enthusiasm about it to that other person.

How can you become better at selling your products?

Think what your life would look like if you were able to sell your products as enthusiastically and good as other products. Think of all the possibilities that will present themselves. In what area do you need most work? And most importantly, what single step can you take today to improve in that area, and ultimately your ability to sell.

Please comment below on the selling areas in your life that need work. Maybe you have identified other hindrances than the four I listed? If so, I’d like to hear more about those.