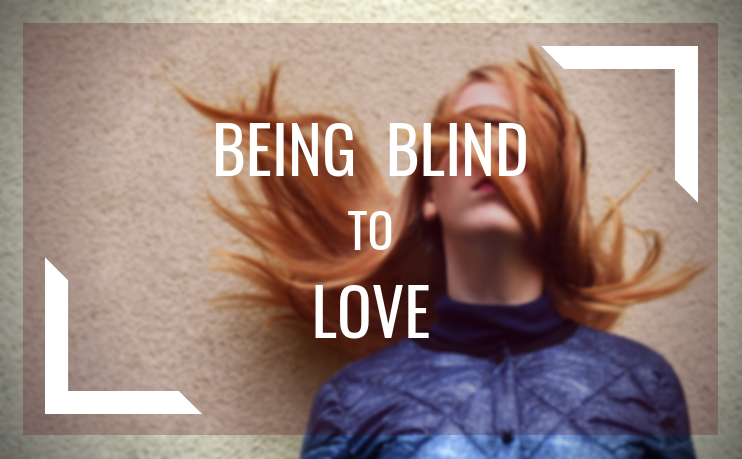 I’ve often been blind to love in the sense that I don’t notice when someone is attracted to me. I’ve sort of always known this deep down, but I never grasped how blind I was and why until just a few weeks ago. Here are my experiences, patterns, and what I’ve learned about myself in the past weeks. Maybe they might help you identify if you’re blind, either in love or in other areas of life.

A little back story

There have been two occasions in my life where the illusion of people not being attracted to me shattered, the last one being just a few months ago. (There have been times I have noticed that people are interested in me.)

The first time I was blind was with a friend who, for various reasons, I thought would be a bad idea to fall in love. Even when she kissed me on the neck a couple of times while out partying, I didn’t know she was interested in me; I attributed the kissing to alcohol. She had to spell out through text that she liked me. And even then, it was hard to grasp and believe what she was saying. I must be the most hard-flirted person alive ?

The second story is with a friend I got to know almost three years ago through Tinder. She was (and is) an awesome person in so many ways. It didn’t take long before I had developed feelings for her, even though we had never met. She, however, wasn’t interested in me in that way, but we kept touch and became quite good friends throughout the years. This summer (about three months ago), we decided to meet for the first time since we’ve been friends for so long. We also live 30 minutes from each other, so there’s no real reason not to meet.

I had a good time talking with her, and it was nice seeing her for the first time, but it wasn’t anything special. Well, in one sense it was special, but that’s to come later. While biking back to my apartment, I got an incredibly heartwarming compliment. I even had to stop biking to soak it in. Later that same evening, she wrote to me that she had felt a connection with me, a connection that was similar to what she felt when meeting her boyfriend for the first time. I was stunned by that comment and at the same time baffled “this certainly looks like she’s interested in me, is she really?”.

Afterward, I could see the signs. But how come I was so blind at the moment? One obvious pattern was that I had dismissed any relationship with these two. It was so far out from my current belief, and while that has some truth to it, it’s not the entire picture. And in general, I’m quite quick to dismiss any relationship with a lot of people who might develop feelings for me later. I’m not entirely sure why I do this, it’s merely something I do (for now).

It’s quite easy to tell the signs from the first friend, but there were signs from the second one as well. During the later half, when we sat in the coffee shop, we listened to a music piece together through hear in-ear headphones. To be able to listen simultaneously, we had to lean in quite close to each other, and during that time, I could sense something. I’m generally a person who has no trouble looking in people’s eyes, but I still remember the feeling; how I vulnerable I felt during that time, and there were a spark and a tingling sensation between us that I didn’t want to acknowledge, so I relaxed, closed my eyes, and listened to the song. After all, that wouldn’t be such a weird response.

The next sign was that she was very eager to continue speaking with me when I got back home. And we talked for quite a while before she told me how she had felt earlier that day.

Even though I can see that I did notice the signs at the moment, I was still blind to them. Not just blind, I was actively trying to ignore them. How come that was the case, and have I been like that with others as well?

Being afraid of love and rejection

It took some time and introspection before I noticed that I wasn’t blind. I had always seen the signs; I just decided to ignore them (subconsciously). Every time I saw the signs, I felt afraid and fled from the emotions by putting on a facade.

What was it that I was afraid of? My first thought was, I am scared of rejection. While that’s true, it’s not the entire picture (it never is). Why am I afraid of rejection? I could see a pattern from when I was 6-12 years old and being rejected by girls all the time, usually with the looks like “who would like to go out with you.” I am afraid of getting that look again, but that’s not the entire truth either. In this particular case, it had more to do with being replaced than rejected. If someone were interested in me in childhood, they would change their minds days or weeks later, i.e., being replaced. Or that’s the story I’ve told myself; it could just be a planted memory from one instance and not many. Fun fact, almost all my jealousy stems from the thought of being replaced.

I wanted to go deeper with this fear and not stop there. I’ve heard that most of our irrational fears come from something our parents did to us as children. I’ve found this to be accurate; not all the fears, but most of them. So was there something my mother or father did as a child that made me develop a feeling of being replaced? Yup, there sure was. The first thing that came to mind was something my mother used to joke about; she would sell me to some other mother (if I didn’t behave). While in hindsight, this is a terrible thing to say, I don’t hold it against her. She did her best, and she knows she shouldn’t have said those things.

Hold space for your feelings

Before continuing, I’d like to point out a few things for those of you who are curious about the whole process. When I do these kinds of introspections, it’s not only the mind that’s active but also the ability to feel my feelings and hold a space for them. Sometimes I end up just holding space for my emotions and not trying to work them out or get rid of them. I did that when I first noticed the fear; that it’s okay to be afraid of being replaced. I now know I’m actively ignoring signs and that I always get scared. I can use this as a trigger to remind myself to look at the fear straight on, make it feel seen, instead of trying to push it away or run from it.

The other alternative is to replace your fear (belief) with a few different positive beliefs. I ended going this route when I started to get jealous about a month ago. While I think it’s okay to feel jealousy, I tend to see them as an opportunity to grow and become more centered in myself. I did have the same jealousy with my current girlfriend. I thought I had gotten rid of the jealousy fully back then, but the fear of being replaced dissolved after a few years as I had proof that no one else could replace me.

This time though, I wanted to get rid of the fear once and for all. It’s irrational, and it’s not helping in my other relationship.

Replace your fear with another positive belief

What I ended up doing a sort of combination of the Lefkoe Method and a kind of self-hypnosis.

I went into a meditative state and started to accept what I felt. I tried to put my self in the shoes of a 5-year old Matteus hearing my mother tell me she would sell me to another mother. Then, I pictured different scenarios and tried to hold a space for the feelings that came up. When I felt that I had accepted all or most situations, I went on and pictured alternative interpretations of my mother.

Once I had these three beliefs, I engrained these as a higher truth than my previous one. Usually, it takes a few days until the body has accepted this as the new truth. I’ve never felt confident that it worked on the same day. As I’m writing this, I can say for sure that it worked. Both that my current truth is that she joked about this is my new highest truth. But a few days after doing this exercise, a situation that would’ve triggered me arose in the other relationship. This time I felt nothing. It’s always so mindblowing how well this tool works for changing my own beliefs.

Am I still blind?

I’m not entirely sure if I’m still blind. But I know that if I feel afraid when talking to someone, it could be that they are showing interest in me. Although, I probably won’t be scared any longer if I replaced the correct fear. But I won’t know for sure until a new situation arises that would trigger my fear.

At the beginning of this post, I hinted at the possibility of being blind in other areas of life. I haven’t explored this thought that much yet, but I can see that whenever I felt uncomfortable and didn’t know how to handle a situation, I would flee it and try to forget about it. Maybe I’ll meditate on it in the coming days ?

Have you been blind? Were you afraid that something would happen if you acted on those feelings? I’d love to hear your thoughts and answers in the comments.

If you need help with a situation or someone to talk through your problems, feel free to contact me and we can probably work something out ?