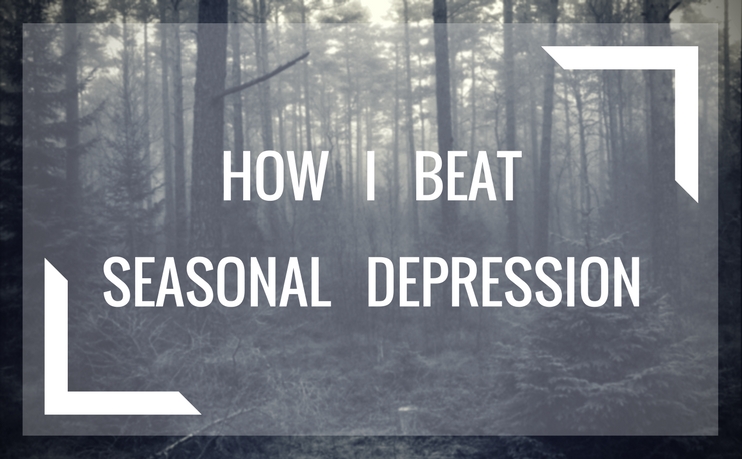 Earlier this year, in February, I had a severe seasonal depression. My mental capacity was at zero. I couldn’t concentrate. It felt like my brain was a lump of greasy mud; even having a normal conversation was a challenge. So for two weeks, all I did was to play games all day long.

But as always, I grew tired and frustrated with the situation. I longed to write articles for this blog; I didn’t want the seasonal depression to continue all the way until April. I had to cure it no matter what. But that’s not that easy when you don’t have the energy to do anything.

Even if I live in the south of Sweden, it usually gets pitch black around 4 pm during winter, and the sun doesn’t go up until 8:30 am. And because the sun always is so low it can’t penetrate the clouds. So three out of four days are grey.

While it’s true that we in the south get more sun hours than those in the north, there’s one significant disadvantage in the south. We rarely get any snow to create a white and bright landscape, so we have to do with a grey, wet, and windy winter.

In the past, I’ve always had a mild case of seasonal depression during the winter. The symptoms usually present themselves in late November or early December. They often come in the afternoon, and I find it hard to focus and do tasks. But I never had to take a break from work. I could always concentrate enough to work during the day.

Events leading up to the seasonal depression

In the middle of October, I was in a workshop with Steve Pavlina in Las Vegas. That meant I got lots of sunshine. In November I also started doing the Wim Hof Method; which was the first time I had been energetic a whole day even when it was grey outside. All the way throughout December, and even until the end of January I had lots of energy.

But then I got the flu. The first day (Tuesday) I worked until I noticed I couldn’t concentrate any longer. I then decided to take a break from work until the flu was gone. For the rest of the week, I ended up playing games most of the time. I didn’t have the energy to do much, mostly because I was sick. Which was true, but I when I was ill I probably depleted all my saved up energy from my trip to Las Vegas and the Wim Hof exercises. Because when I returned to work on Monday after I got well, I had a hard time working. I tried to work on Tuesday and Wednesday too, but I just couldn’t do anything. Thus I decided to take some more days off.

One week after I got well from the flu I still couldn’t work, so I decided to look it up and see if my symptoms matched the symptoms of seasonal depression. I went to the official Swedish site for facts and advice on sickness and injuries.

You can say that I hit the jackpot.

You’ve probably had the feeling that it can be tough to start a task. But once you’ve already started it’s easy. It was sort of like that for me with everything. It was a lot harder for me to start anything.

But it didn’t end there. Because about every minute I had to re-commit to continue with the task. Meaning I had to force myself to stay focused on the job. After about 10 minutes of trying I was exhausted and couldn’t do anything anymore. What ended up happening was that I would blankly stare at my screen for another 10 minutes before giving up.

I now had confirmed that I had seasonal depression. My next step was to figure out what I could do to solve this problem. What I could see there were three different solutions to this problem

The fastest and easiest way to fix this problem would be to go abroad. To go to some sunny place and be in the sun all day long. But I had some objections to going abroad.

2. Using life hacks to beat it

Instead of going abroad, I could try to use life hacks to overcome the seasonal depression. I did some research, asked friends, and used some personal experience of what could help.

Get as much light as possible

On the same Swedish site, I found the advice to take a sunbathe as much as possible. To take a sunbathe means going out as often as possible, but at least once per day during the brightest hours. So I’ll take a 30-minute walk after lunch every day, both in the workday and the weekend.

The site also mentions that you can take light treatment. Although it states that this method has yet to scientifically proven, it seems to help some people.

My plan involves a Philips goLITE BLU which I bought last winter. I have it turned on from the morning until late afternoon.

The goLITE BLU lamp can also be set as an alarm (to start shining). A feature I use every day now. It makes it a lot easier to get up in the morning when the room is filled with a bright blue light. I seldom have that tired sleepiness when I wake up that I used to have before.

The Swedish site also stated that it’s vital to continue or increase the amount of physical activity. This led me to create a simple workout morning routine: Do as many push-ups as I can, then do the same amount of sit-ups. As soon as turn off my alarm I start doing my push-ups.

I didn’t want to make the workout complex with many different exercises, as I had limited energy. Anything longer than 3–4 minutes might make it hard to get out of bed. At least in the beginning. I’m all about taking small steps.

But I wanted to have more exercise than the morning and the 30-minute walk. So I decided to walk up the stairs to my apartment on the 8th floor. At least once per day.

Vitamin D and B12

To combat the lack of sun in our area, I will be taking extra vitamins. I’m eating vitamin D pills because I don’t get enough sun. But I also added B3, B9, and B12 because I’m a vegetarian and it can be hard for us vegetarians to get B12. But more importantly, the vitamin pack stated that B3, B9, and B12 reduces tiredness and exhaustion. As soon as I saw that, I thought “Sign me up on that!”.

Nowadays I’m also taking Magnesium, but that’s because it’s a common deficient for many people today; only 28—44 percent of the population get enough magnesium for optimal levels (source). And there were a lot of troubles associated with magnesium deficiency, so I thought why not take more magnesium as well?

During our session, Darrell channeled through the idea that I could meditate that while it was winter outside, it was spring inside me.

I found this meditation exercise highly effective and energetic. It felt like it was spring, even outside. I scheduled 10 minutes of meditation after the morning workout. The meditation (plus visualization) allowed me to calm down after the workout and start my day focused.

Nowadays this fits perfectly with my Miracle Morning routine 🙂

After my meditation, I always take a short shower. During this shower, I ask three empowering questions I got from Tony Robbins’ book Awaken the Giant Within

. I answer each question at least twice.

These questions focus my energy even more. I especially like the question: what am I excited about today? It makes me look forward to the day. How do you think your days would be if you asked these questions at the start of your days?

Once again, these are part of my Miracle Morning 😉

Before I end my shower, I take a one minute cold shower. When I did the Wim Hof Method, I noticed that I got energized by taking a cold shower at the end of my regular shower. It was such a refreshing experience. But I didn’t want it to be ice-cold as it’s in the Wim Hof Method. I found (somewhere) that it might not be healthy to do a cold shower unless you prepare yourself with breathing exercises.

Nowadays I do ice-cold showers; I’ve gotten used to it and like the experience 🙂

3. Surrendering to being ‘useless’ in the next coming months

While it easy (for me) to fall into the trap to try to fix myself, it can be good just to accept the situation and live in the moment. That’s a totally acceptable path to take.

But I had a hard time even thinking of this path as an option. I had taken it easy for two weeks already, and while it’s fun to play games, I wanted to do something creative; I wanted to write articles; I wanted to create apps. It became a boring and meaningless life just to play games. This path was not for me. At least not this time.

I’ve often ended up in situations like this before. For 1–3 weeks I lose motivation and don’t do anything work-related. But in the end, I find everything else I’m doing meaningless, and I get frustrated about my situation I put myself in. So I do something about it.

For me, this period is natural to life, so I never force myself to start working. I know I’ll become frustrated with the situation and do something about it. It would be nice to find a way to become frustrated a bit quicker sometimes though. Or have these periods more seldom. But maybe it doesn’t work that way.

I decided to try using life hacks for a week and see if that worked or not. If not, I would go abroad for a week-long vacation in a sunny place. But the life hack worked. I noticed a huge difference on the third day, and on the fourth day, I was able to work almost as normal. It didn’t cure the seasonal depression entirely. But I was able to work at 80–90% capacity. And that was enough for me 🙂

Do you usually get seasonal depression? In what way do you try to solve or not solve the problem? Please share your answers in the comments below 🙂

2 thoughts on “How I Beat Seasonal Depression”