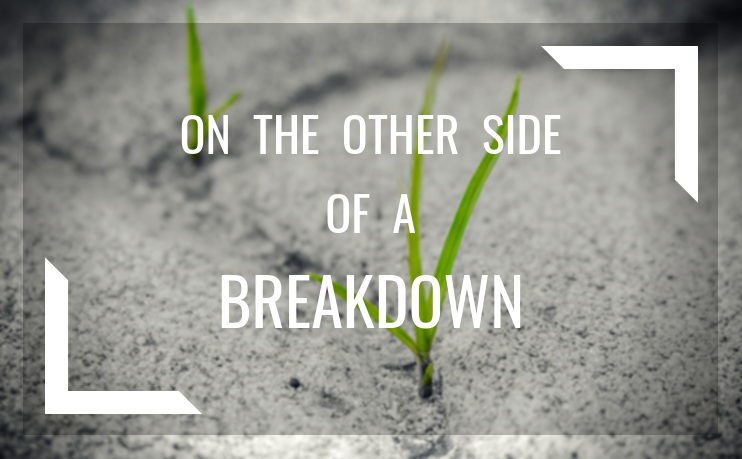 It’s been more than one and a half years since I last wrote anything on this blog. So much has happened since then, so many experiences, and so many emotional rollercoaster rides.

Why has it taken me one and a half years to write anything here? Well, there’s no simple answer to that. And instead of giving you the simple answer (which I’ve already given you through the title of this article 😂) I will share a few stories and lessons throughout the coming weeks what has been going on in my life.

Honestly, I don’t know what I will write in this article, or what the topic even is (except breakdown). And you know what, that is totally fine. I’m just going to wing it and be myself.

Why did I stop writing?

Writing started to feel a bit too much like work. I started churning out two articles every week and if you have read some of my articles you know that some are quite long and it takes time to write, edit, create a picture, and posting it to Facebook. But that wasn’t why it felt like work. No, it was just that I ran out of topics to write about. I had to research topics and write about them even though I wasn’t inspired to write, which led me to burn out and eventually have a breakdown. It wasn’t until a month ago I once again got excited to share something with you again. Not only to write here, but essentially I got excited to write books, to write to people, to write in my journal, and just to write because of writing.

While it works for some to write while they aren’t inspired, it does not work for me. I need to be inspired to write and that’s also when the best articles get written. It does seem to be like that with many things I do. I need to be inspired and have some motivation to do anything. Albeit it can be a long-term motivation. So I don’t need to have the motivation to write while I’m writing, but I need to have a clear goal of what I want to achieve. And that I did not have.

To give an analogy. When I was playing the piano daily (about 9 years ago), I practiced two hours per day. Did I want to practice every day? Hell no. But I was determined, I wanted to become exceptionally good at playing the piano. So I practiced almost every day 2 hours straight. Even days I was dead tired when I came home I always sat down by the piano and started playing. There wasn’t even a choice, it was a must for me to play the piano.

So it’s not that I can’t do “boring” or repetitive stuff. I’m certain I could keep a two-articles-per-week schedule IF I had a clear goal in mind what I wanted to achieve. But I did not, which lead me to feel completely lost. For the first time in my life (yes the very first time) I didn’t know what I wanted to do with my life. Ever since I’ve been like twelve years old I’ve been 100 percent certain that I wanted to work with games in some way. I did want to become a teacher as well during some periods, but my conviction that I wanted to do something with games was always a few magnitudes stronger.

Sometimes I do miss those days, those days I was so certain about what I wanted to do with my life. I know I can never return because what I’ve seen cannot be unseen. It’s like stepping out of the Matrix; if you take the red pill you cannot go back into the Matrix and live as nothing happened. While I’m certain that I don’t want to go back there’s still some lingering grief over that loss.

The breakdown contained more than not knowing what to do. It was failing my business. Admitting defeat. Not trusting myself. Not trusting in my abilities. For as long as I’ve remembered I have thought that if anyone else can do it so can I. But during this period I second-guessed all my thoughts, all my decisions, everything.

It’s a horrible feeling seeing how your entire world—how you think of the world and how it behaves—just crumble. It’s like 1+1 suddenly was 3. That would break all math. I didn’t know what was true anymore, I couldn’t even trust my feelings anymore. Sure I could trust what I felt in the moment, but not long-term. It felt like I was going crazy since I could not see what was real and wasn’t real in a sense. Not as in hallucinating or having split personalities. It’s extremely hard to describe, and you probably will only get it if you’ve been there yourself. And if you haven’t been there, I hope you will remember this text if you ever happen to go there so that you know that you’re not alone.

One day I would be certain with full conviction what I wanted to do, the next day I would feel the same 100 percent certainty with something else. It doesn’t take many days until you notice a pattern. That is what I meant by not being able to trust myself. I knew that even if I felt like this is what I wanted to do, it would change either tomorrow or in a week. When you can’t trust what it is you want you can’t make a long-term plan. The trust was not just about what I wanted to do professionally, it crept into almost every part of my life.

Maybe I’m actually not that good at programming, maybe I suck at the piano, maybe I’m not a ‘good’ boyfriend, maybe I am selfish, and so forth.

So what did I do during this time? I did nothing. Because what’s the point if you’re going to change what you want to do the next day? And what’s the point when you doubt yourself in almost everything? Today, I can see that there’s still a point, although it can still be hard to act on it as I have one straggling foot left in that mindset.

Doing nothing led to me becoming apathetic, or maybe it was the other way around? Can’t remember which came first. But that eventually led me to have lots of anxiety and going into a depression (I will talk more about this in another post). So I stopped eating regularly, I started eating crap food as I stopped cooking food, I started eating out a lot. I did gain some weight, and I was glad for some of it since I wanted to go up in weight a bit in weight.

While I did say I didn’t want to do anything there was one thing I wanted to do; play computer games. Mostly Factorio and Minecraft. I got hooked on Minecraft as it allowed me to be creative in a “safe” environment. There was no pressure on what I had to do, I didn’t need to build in a specific way. It was a break from all the pressure I had put on myself over the last years; pressure I had from my family (which was all my imagination).

Although playing computer games allowed me to relax, I couldn’t relax fully as I felt a lot of shame because that was basically the only thing I did. I spent on average twelve hours per day playing games between October last year and May this year. I don’t think I ever have spent that much time playing games. It was the only thing that I could manage to do.

In hindsight, I can see that it was my way of processing and relaxing. The games, especially Minecraft, was a light in the darkness. I could see that this was something I loved doing. I even started to record episodes of playing Minecraft and even stream a bit. That was as close to pure joy I could reach in those dark times, during the breakdown. It was also the only place where my mind worked as close to normal as possible. It’s strange how different of a person I became while playing (close to the normal me) as opposed to how inept I was outside the games. I’m almost fully back to normal now if you’re wondering. And if you’re not wondering, you got to know that anyway 😉

I still don’t know what I want to do with my life. But I don’t feel lost anymore. I can see a new me emerging from the chaos, a calmer person, one that cares about the essentials in life (relationships), one that knows that everything will be okay no matter what.

I don’t see myself as a programmer, game programmer, designer, writer, blogger, YouTuber, or anything else anymore. I’m just myself and instead, those are tools I can use to accomplish whatever it is that I want to do. I don’t have to lock myself into “I’m a programmer” or “I’m a blogger”. Instead, I can see what I want to do and then see which tool(s) I can use to make that dream a reality.

So I’m mostly optimistic about the future 🙂 Although, I can feel there’s still some doubt left in me; maybe around 8 percent.

You’ll also see me writing more on the blog. I can’t say how often, or even when the next time is. I’m going to wait until I get inspired to write something, it will probably be some lesson or insight I’ve gained during or after the breakdown 🙂

Have a nice day! 🙂
Matteus