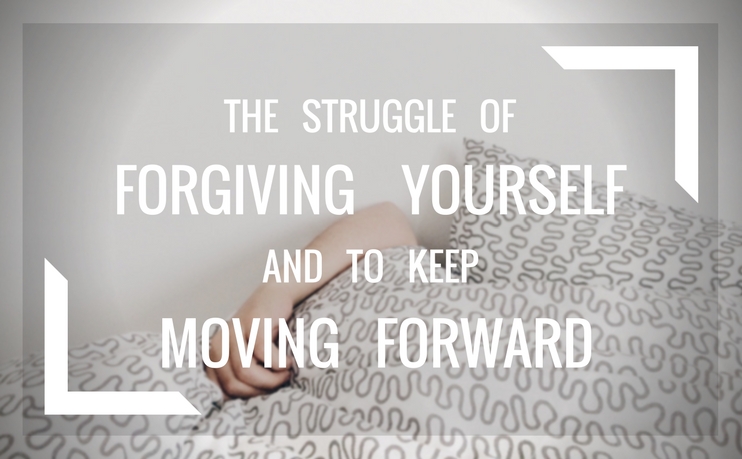 I don’t know about you, but I have a hard time forgiving myself for my blunders and being non-perfect. Even the act of not forgiving myself makes me hate myself more because I know that self-loathing leads nowhere, which in turn makes things worse.

I am aware that the act of forgiving myself gives me energy and motivation to do something about the situation. The best option is just to accept it and make the best of it, move on, and try better next time. But that’s not always that easy.

An early riser (not)

Today (when I wrote this), I was supposed to get up at 6:30 am, I got up at 11:30 am instead. I just don’t have something in-between. Either I get up at when the first alarm rings or I get up at least two-three hours later; in this case, five hours later. When I got up at 6:30 am, I didn’t want to get up (a bad habit of mine that I want to replace). And because I don’t do snooze (it doesn’t work for me), I got up, turned off the alarm, and set another one at 7:45 am.

I don’t have a memory of the second alarm ringing or turning it off, but it probably did ring. It’s just I’m on autopilot during the first few seconds when I get up, especially when it’s the second or third alarm. So I probably got out of bed, turned off the alarm, and went back into bed.

Hiding under my bed sheets

When I woke up later, I knew I had slept for a while. I didn’t dare check the time, and I didn’t want to get up. My inner voice went something like “You’ve done it again, overslept by several hours, not being able to get up on the set time you set to yourself. You’re worthless.”

I didn’t want to face this reality, so I decided not to continue to ignore the time and sleep a bit more. “If I hide under my bed sheets, the problems will go away.” This processes repeated itself three-four times.

Of course, the problems won’t go away; they will only become larger. And eventually, I have to face them.

So finally, I looked at the clock which said: 10:52 am. I continued to lie in bed for another 15 minutes, this time fully awake still struggling to get up; I just couldn’t as I wanted to stay in bed and do nothing.

But as usual, I got tired of my self-loathing, so I decided to read until I felt ready to get up.

Okay, so what am I going today. I just want to play or listen to the Kingkiller Chronicle. But I can’t since I didn’t get up on time. There’s nothing I can do today…

You know what, this is just a minor setback. I got up two days in a row for the first time in ages, and I feel positive about continuing with getting up early. Setbacks happen to everyone, and especially in the beginning. So how can I make the most out of this day? I’ve lost five hours of the day, but what can I do to make the most of the rest?

I’ve probably never been so fast with forgiving myself before. It felt great. I even decided to practice getting up right then and there, instead of later in the day. My ‘most important thing’ for the day was to write an article. So I thought to myself.

Why not make the writing process easy and write about the experience I just had. How different the day became when I forgave myself and moved forward.

What often happens is that I don’t forgive myself. I tell myself that this day is lost. When I lose the day, I only do a few things that I absolutely must do—to eat.

The rest of the day I play games, listen to audiobooks, or watch series. I know that all this is just a way for me to escape taking responsibility for my life. It’s just so hard to get out of that loop.

I often try to set a time limit for when I’m going to start working again. For example, I might say to myself I’ll play until I’ve completed this mission, until 2 pm, or when I’ve watched this episode. Of course, that never happens.

What was different today?

A few days ago, I set a new rule for myself. If I don’t get up at 6:30 am, I’m not allowed to do anything fun during the day. Or to be precise, I don’t allow myself to play games, watch series or movies, or listen to audiobooks. I can still, however, read novels.

What this effectively does, is that I can’t watch ‘just an episode’ of something. I don’t allow myself to do things in moderation.

I read about this effect in Tim Ferriss’ book Tools of Titans. The idea is that in some areas of your life you’re an all-or-nothing type, i.e., moderation isn’t a choice. The domino triggers exist in everything from games to food.

If I start playing a game when I’m in my escapism-mode, I will play for the remainder of the day. I can’t just play for 15 minutes or 1 hour. It’s 0 or 15 hours.

The same goes with candy for me. I can, however, eat one candy. But I can’t eat two pieces. It’s either one or the rest of the bag.

You can even see the domino effect of how I’m unable to get up at the second alarm if I go back to bed. I can’t snooze for an extra five more minutes; I can’t get an hour extra sleep. It’s either get up directly when the first alarm rings, or get at least two more hours of sleep, but more often than not four-five more hours of sleep.

Don’t allow yourself to push that first domino brick

As mentioned, I find it a lot easier to have a rule that I can’t play games, watch series or movies, or listen to audiobooks if I don’t get up on time.

The self-imposed rule makes it easier to get out of bed as I might want to play a game or continue listening to an audiobook in the evening.

It also means that I don’t push the first domino brick, and I have to take responsibility for my choice of not getting up on time. Since there’s nothing fun to do, I might just forgive myself like I did today, or I do some things anyway because there isn’t anything else to do.

I didn’t plan to give any advice in this article. I only wanted to talk about my struggles and how difficult it can sometimes be. It’s still difficult.

I often feel like I take a step forward and one backward, staying in the same place forever. But I know it’s not true because if I look back, I can see the progress I have made. It’s just taking longer time than I expected, with more setbacks, and more detours.

What’s your current struggle? When do you have a hard time forgiving yourself?

In addition to getting up early, I struggle with making an income of my business, fear of success, being myself in social situations, and lots and lots of other things.

What are your domino triggers? Where are you an all-or-nothing type, and maybe when? Feel free to share your thoughts in the comments below 🙂