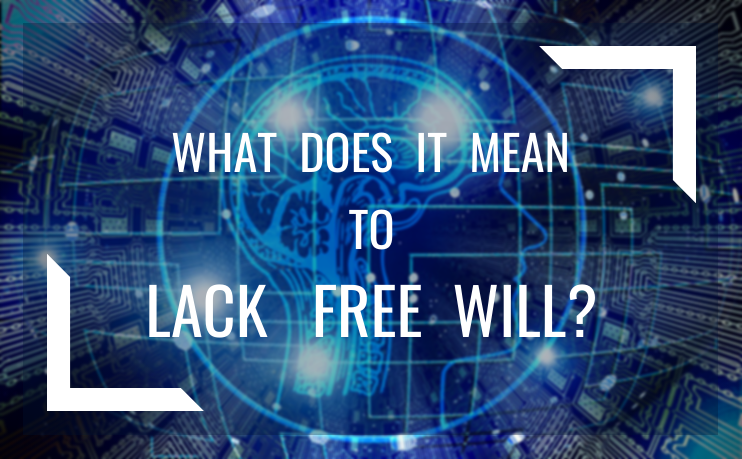 What if our universe is entirely deterministic? That the future is already determined for us, and we lack free will. What does this mean for you? What does it mean for me? Does it matter what we do with our lives or not?

These are a bunch of big questions that were dropped on my plate last night. When I had some trouble falling asleep, I “decided” (read: I got bored and started Facebook) on my phone. But I stumbled across a friend’s thoughts of Stephen Wolfram’s new theory of physics. If the universe is entirely deterministic, does that mean our future is already determined, we just don’t know how it will look. For example, ever since the start of the universe, it was determined that I would be conceived, that I would write this post, and you will read it at this exact moment. Ponder on that for a while…

What does it mean to lack free will?

My first reaction was to feel helpless and that I couldn’t influence the future, so what’s the point? If it doesn’t matter what I do, how does anything matter? It means that I haven’t been in charge of my own life, or does it?

I fell asleep with those questions in my mind, and when I woke up, they still filled my head this very morning. But I decided to try seeing things from multiple angles instead. What does it really mean that the universe is determined? Can you use it to your benefit instead of detriment?

The first idea was that it does matter what I do because what I do still matter and will influence others. You reading this is proof of this. Not substantial evidence since Wolfram mentions that different paths can lead to the same outcome, something he calls Causal Invariance. So even if you don’t read this post, something else might influence you so that the universe as a whole would end up in the same place. But that doesn’t mean your life wouldn’t be different; it might mean that the universe (or part of the universe) might converge at the same point in the future.

For example, let’s say a black hole will come across our solar system in 1000 years from now. It doesn’t really matter what we do now if we only look at the outcome in 1000 years. The outcome will still be the same, but what does matter is that the path we took there is different.

This line of reasoning does have at least two flaws. For example, if we did decide to go to Mars, the black hole would probably look a tiny bit different than if we didn’t, meaning it would lead the universe to a slightly altered state. But I think this is the best example I can give without getting too technical. You can always read the whole article by Wolfram if you’d like.

The second flaw is that according to the rules, the path you take would already be predetermined. This means that you can’t decide which path to take; it is already predetermined. But that doesn’t per se mean that your actions don’t matter. Whatever you do or don’t do, that matters.

None of your mistakes is your fault

Thinking that your mistakes aren’t your fault is a dangerous road to go down, especially if you frame it wrong. I like to think of it as this also means is that none of your achievements are thanks to you. And that others’ mistakes (and achievements) are not thanks to their actions.

The way I find it uplifting is that I can frame all my mistakes and things I blame myself for as they were meant to happen, or unavoidable in one sense. If I go into that mindset, I feel a lot lighter and don’t judge myself as harshly as I sometimes do. That doesn’t mean I won’t try to do anything different and become stagnant. What it does is it frees up stuck energy that I can now use to make a change. So in the case that I do have free will and the universe isn’t deterministic but indeterministic, I can use this tool to boost my self.

If your achievements and mistakes aren’t your fault but meant to happen, then there’s no point in waiting to try something is there? If everything is determined, you don’t have a say how the outcome will look like, so why not try something you might be scared of doing? The result is already predetermined, so you couldn’t have done something different. What you can do is learn from your mistakes and look forward. What is done is done.

I’ve tried to use this mindset before and only partially succeeded. Maybe because to do so would in one way mean relinquishing your free will? I extremely rarely regret anything, but I do sometimes wish things were different or had gone differently. Hmm, that things were different, I think many people would want that since we would get stagnant if there were no change at all—a desire to change something in the world or our selves. But wishing things would have gone differently is more living in the past, and the past is something we can’t change. All we do have is the now as Kyle Cease often says.

You are still responsible for your own life and happiness

With that said, I want to point out once again that it can be dangerous to shift the focus away from you and let yourself become the victim. Either of circumstances or in this case rules of the universe. You are ultimately responsible for your situation. Mark Manson has written about this in his book The Subtle Art of Not Giving a F*ck. And that particular section is also available as an excerpt on his blog.

Aren’t I contradicting myself now, saying that you’re ultimately responsible for your situations but also that your situation is already predetermined? Well, yes and no. Instead of thinking of any of these as absolute truths, you can think of them as tools. Even though it might be the case that the rules of the universe are to blame for your current situation doesn’t mean that you can’t take responsibility and improve it. Or at least think that you can improve it. Putting the responsibility outside of yourself will only (as far as I’ve seen and experienced) make things worse for you. It might be easier to cope with at the moment. Still, long-term, I’ve never seen an example of things steadily getting better for people who put the responsibility outside themselves.

So far, Wolfram’s theory is in its early stages, and while it sounds promising, it doesn’t have to be the final truth. Our civilization has been through many paradigm shifts before, and this doesn’t have to be the last one. Besides, the concept of free will is nothing new. It’s a prevalent topic in religion, and if you search for “is the universe deterministic?” on google, you’ll find a lot of debate here as well.

What I found interesting though, is how it would feel to believe you don’t have any free will and how you can use it to improve yourself.

One thing to note, nothing I’ve said here is new, although it might be a bit of a different take on it.

By thinking that I lack free will, I find it easier to forgive myself for my mistakes. I feel less afraid to take action that might seem scary or risky; what happens happens, and there’s a less emotional attachment to the outcome. I find it easier to live in the present and don’t dwell on the past so much or live in the fairy tales of the future.