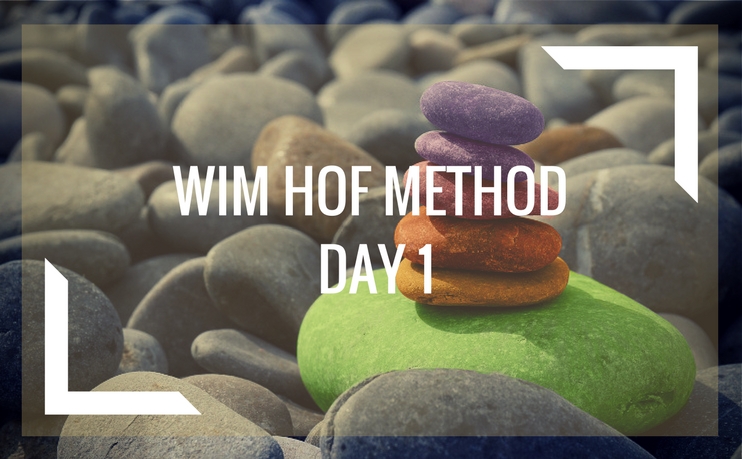 Yesterday I found this incredible guy, Wim Hof, who has mastered the ability to control his body (immune system, body temperature, energy) through a combination of breathing and mind exercises. I was so intrigued by Lewis Howes’ interview of Wim Hof yesterday that I went on a rampage and researched the hell out of this guy.

Apparently he has been submerged in ice cold water for 1 hour and 52 minutes. He has climbed Mount Kilimanjaro in shorts within two days. Done a full marathon above the arctic circle in –20°C (−4 °F) in just shorts. Another marathon in the Namib Desert without water. Wim accomplishes these feats because he can control his body temperature (turning up the heat generation without movement). Thus he suffers no negative consequences like hypothermia.

Science to back it up

Because Wim is able to control his body and do things researches thought impossible many researchers want to do tests on him 😛 He have been part of many tests and many of the things have been scientifically proven: Like his ability to control the immune system and resist bacteria, lower his heart rate, and the ability to increase metabolism for increase the body temperature. There are, however, many things left that they are working on to prove: By using these breathing methods you can cure some diseases; ranging everywhere from stress, depression, multiple sclerosis, to cancer (maybe only some sorts of cancer?).

I’m not entirely convinced that the method can cure everything, and I wonder how much of it’s the placebo effect. So I’m eager for what the research will say in the future. I have seen a testimonials where applying the Wim Hof method almost cured multiple sclerosis entirely. I don’t think the person made this up, but as I mentioned it could also be a placebo (but not entirely right?).

After reading about the Wim Hof method I was so fascinated. I had to try it out for myself. So I bought the 10 week online video course. I’m eager to see where I will be in 10 weeks, or even just a week from now.

I decided to blog about my experience during these 10 weeks since I know there are people that want to follow me on this journey. I’m not sure how often I’ll blog about it, my guess is maybe a article every week.

The 10 week course is very simple, and I think that’s the beauty of it. I won’t go over the exact details, but the method is basically split into 3 parts: breathing exercise (video), yoga or push ups, and a cold shower. Every week these intensify until you will be able to withstand cold, control your immune system, and do some really remarkable physical feats.

Every week has a video where he explains the exercises, what to focus on and what to watch out for. He stresses that you should do these exercises in a safe environment, and that some of the later exercises can be dangerous and you should never ever go beyond your limit. It’s not a competition.

Before beginning with the exercises I were asked to answer what my goals were after these 10 weeks.

I was then asked to measure my baseline before starting the exercise (I did these yesterday).

I could hold my breath for 1:06 (with air inside my lungs). And I could do 17 push ups with proper form while breathing (that was quite low…).

If you haven’t watched the breathing exercise video that I linked before. It might be hard to make sense of what I’m writing here.

The breathing exercises were easy to do. Although I caught myself thinking about other things every now and then, but not close to as much as when I meditate.  The last breathing cycle was tough though. I had to stop breathing and hold my breath earlier than I wanted, as my body was telling me not to continue. I thank Wim for mentioning how crucial it was to listen to your body, otherwise I’d probably would’ve continued.

The biggest changes I noticed after the exercise was that my hearing had improved. I heard another sound I never heard before (not tinnitus), which was kind of weird. In addition I felt at peace and slightly energized, not as energized as I had hoped though.

Not much to say here really, except that it was cool to see that I could stretch further than I expected using the breathing technique he explained 🙂

I found it quite easy this week as I began with a longer hot shower and finished of with a shorter cold shower. It was cold, extremely cold. But I was able to control myself relatively good and I only started shaking once for a second or two. Most of it was probably because of the mental preparation I did before entering the cold shower.

The cold shower made me feel extremely alert and energized. And I felt great 😀 (I think I could get used to having this much energy every morning)

As I’m writing this I can feel that my energy has dwindled a bit, although I still feel energized. And I feel great 😀 I have cold feet and hands, but I didn’t really expect it to work after one day 😛