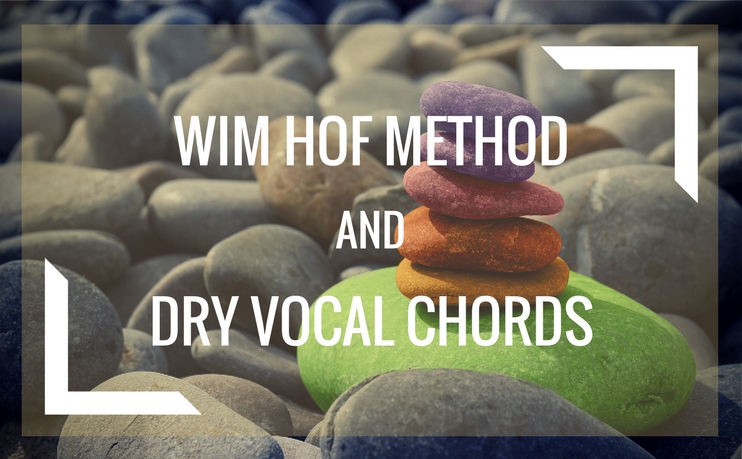 Anyway I decided to take a month break from Wim Hof and then restart the exercises. Now that I’ve come halfway into the second week the symptoms have reappeared yet again. This time around I’m quite certain it’s the breathing exercises that causes my vocal chords to dry up. I turned to the Wim Hof Facebook group for help; asking if anyone knew what to do. I got one good answer: To inhale the vapors from hot water (or tea).

This in turn reminded me of another exercise for dry vocal chords that I saw on TV. The exercise is to blow through a straw into a cup of water. Sounds really simple. But I want to try it, since I want to complete the Wim Hof Method. For credibility it was a singer whose teacher way back taught her this trick. She used it to cure her hoarse voice, dry vocal chords, and improve the strength of her voice. So it seems to work.

I also found a solution to my breathing problem (the gag reflex). Instead of doing 40 breaths, I should breathe for a longer time and while lying down. If I stress the breaths I have a harder time breathing and my gag reflexes kicks in. Lying down also makes it easier for me to breathe without any gag reflexes. I sort of forgot about doing more breaths for a longer time when I restarted the exercises. Maybe that’ll help my dry vocal chords too.

I didn’t want to lie down at first since everyone in the video is sitting, except one. Wim himself said that you can lie down if that works better for you. But I still wanted to sit up since that’s what everyone else was doing. I.e. I thought this was the proper way to do the exercises.

It’s funny how perfectionisticly dumb I can be at some times. “I have to do it 100% correct and make it work that way”. I’ve found that this happens when I’m blogging too. For example I want to structure this series in a certain way. Usually when I try to fit an article into a certain format they become lifeless and dull. But this article was about Wim Hof. Maybe I’ll write about being perfectionalisticly dumb in a future article 🙂

Also I fainted during the third week when I switched positions to do push ups. That was fun 😀