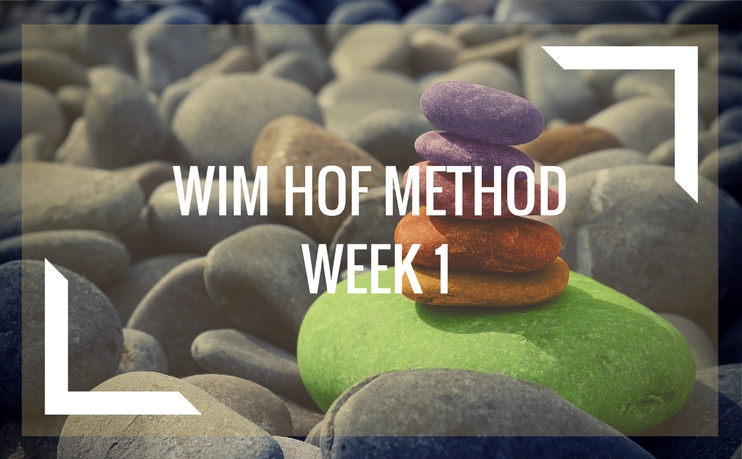 This article is a continuation of Wim Hof Method — Week 1, Day 1. I will go through how my first week has been with the Wim Hof Method. What are my results? What has been hard, what has worked? How has the first few days of week two been? What do I think of the program so far?

I’d say the first week has left me with mixed feelings. Both really positive and indifferently bland. The days I did the exercises I had more energy than I usually have—even compared to when I used to do weights in the morning.

The main problem I have is that the full exercise takes up a lot of time. Especially if you need to watch the weekly video clip several times (fortunately I have installed a plugin to watch videos at double speed).

I skipped two days. Wim Hof mentioned that if you don’t have the time you should try to at least do the 4 or 10 minute exercise instead of the full exercise. Thus I always did a 4-minute exercise before the cold shower. I noticed that I had a harder time in the cold shower these two days, so the breathing exercises help prepare me mentally, and probably physically too, for the cold.

Because I skipped two days I had to figure out if I would postpone the second week or not. I decided to never start the next week’s exercises before I had done at least 7 days with the full exercises. I might stay longer for a week or even go back a week if I notice that I’m not ready for the next week yet.

The presentation of the Wim Hof online course is the only negative critique I have. You get one video to watch five times per week. I can see why it’s good to watch it multiple times; because I tend to pick up on subtle cues after I’ve tried the exercises myself. I’ve also noticed that even though I think I remember everything, I forget some information—e.g. “How exactly should I breathe during the stretch exercises?”. At the same time who would want to rewatch a 30-minute clip where they mostly just breathe?

I think it could be executed a lot better to keep the motivation up for the participants, especially during the first and critical week. The content is great though, it’s only the presentation that is so-so.

They could’ve had one long video, and maybe some other smaller 1–3 minute videos the other days with content that goes through everything essential again, but a lot quicker pace and you only have to learn one thing each day. Or maybe just some cool information to keep the motivation up.

I like that you get to write your results and comments each day in your booklet (you’ve printed). I’m not sure if it could be done better if you had the option to fill it out online. I like writing physically after an exercise, but I also like having everything digitally. Having the hard results digitally also allows for cool charts without having to learn how to use spreadsheets. Fortunately for you, I know how to use spreadsheets and generate charts, so you get to see some ‘cool’ charts 😉

What I would’ve liked it some reminder how important it is to write about it every day. Most will probably get bored after a few days. I most certainly would’ve done that in the past. Because I changed my mindset about that in the past I find it a lot easier today. Maybe there isn’t any good solution though.

As mentioned, my energy levels have been sky high during the days I’ve completed the full exercise. It’s especially cool because the first week was a bit special. I stayed inside for 5 days straight; not something I tend to do. Most of the time when I stay home during one day—especially during grey, dark, and cloudy winter days—I have no energy in the afternoon for any productive work. I was quite surprised by energy boost that lasted the whole day, every day.

I’ve also noticed that it has become easier and easier to do the cold shower exercise. I.e. it doesn’t take many seconds before I adjust and can breathe (almost) normally.

The worst day was on the 15th. I got gag reflexes even when I breathed slowly. I could barely hold my breath over 1 minute during the first cycle.

I’m not giving up though. Wim mentioned that during the first two weeks you might get worse before it starts getting better in week 3 again. I’m counting on that 😛

The push ups are divided into two categories: Push-ups after the 4-minute exercise (without air in the lungs), and push ups after the 4th breathing cycle (with air in the lungs). The 4-minute push-ups are optional. I do them on days I feel like I need the extra energy, I don’t have the time to do the full exercise, or that it seems fun.  The breathing push ups started in week two, that’s why there are only two data points yet.

I found it hard to increase the number of push-ups I could do, for both exercises. It has become harder and harder to do the same amount of push-ups. Usually, I get tired half way through now and have to do slow push ups for the other half. What I should focus on in the next week is doing explosive push ups.